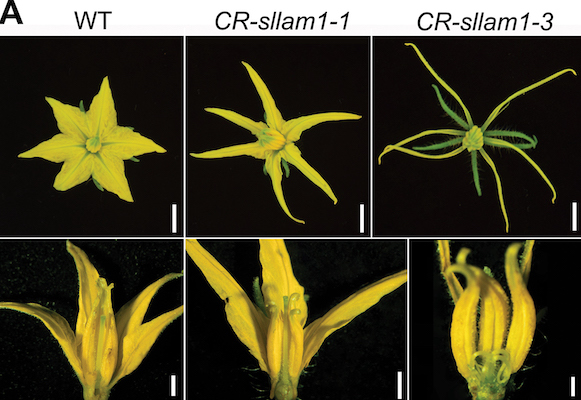 Plant-specific WOX family transcription factors play important roles ranging from embryogenesis to lateral organ development. The WOX1 transcription factors, which belong to the modern clade of the WOX family, are known to regulate outgrowth of the leaf blade specifically in the mediolateral axis; however, the role of WOX1 in compound leaf development remains unknown.

In a study published in Journal of Experimental Botany, researchers from the Xishuangbanna Tropical Botanical Garden (XTBG) uncovered the involvement of SlLAM1 (the WOX1/STF/LAM1 orthologous gene) in the regulation of secondary leaflet initiation and possibly fruit size in tomato, in addition to regulating leaf-blade expansion and floral organ development.

Using phylogenetic analysis and a reverse genetic approach, the researchers examined the WOX1/STF/LAM1orthologous gene, SlLAM1, from the compound-leaf model species tomato, Solanum lycopersicum, and determined that it functions in controlling both leaf outgrowth and complexity.

The loss-of-function mutant of SlLAM1 displayed fewer and much smaller secondary leaflets, and also had defects in the outgrowth of the mediolateral axis of leaves and flowers, indicating that SlLAM1 is involved in secondary leaflet initiation in the Solanaceae in addition to the conserved function in promoting lateral organ expansion.

They also found that knocking down SlLAM1 led to narrow leaflets in the CR-Sllam1-1 line in which the C-terminal and part of the middle domain were deleted, whilst the CR–Sllam1-3 line in which almost all the domains were deleted showed the most severe leaf defects.

“We have thus expanded the range of developmental processes regulated by WOX1 genes in plants, paving the way for further improving our understanding of the evolution of complex lateral organs,” said Prof. CHEN Jianghua, principal investigator of the study.