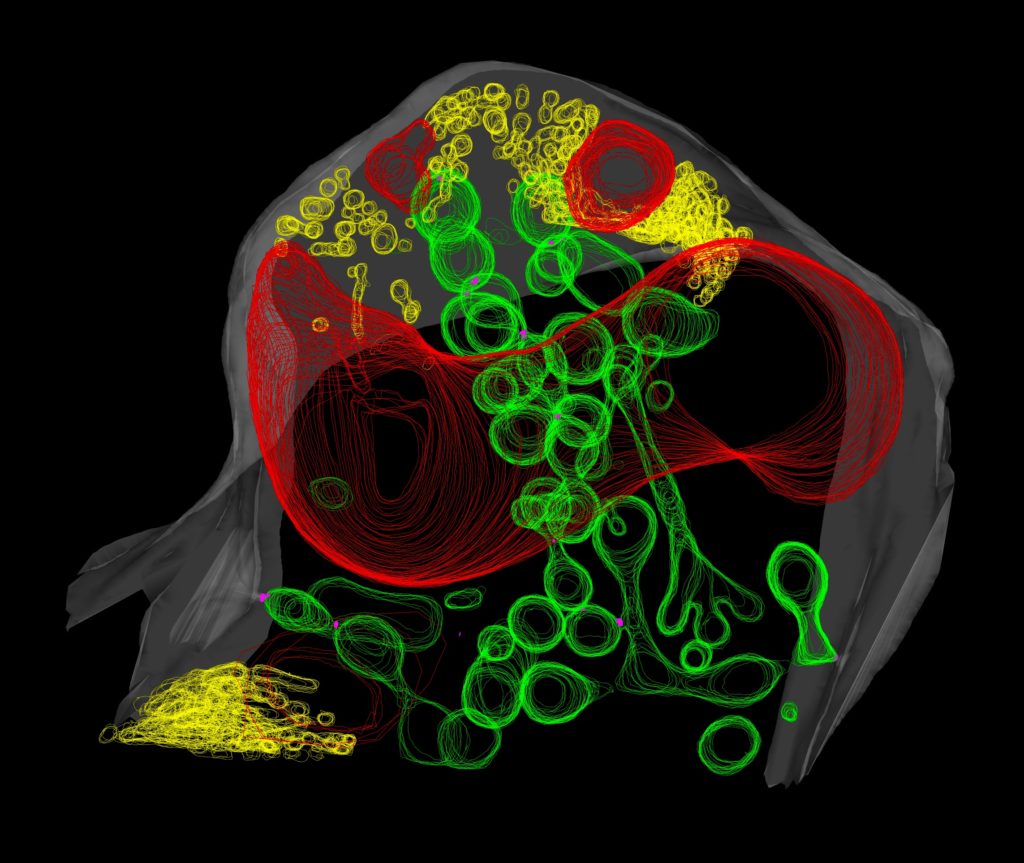 For hundreds of millions of years, plants and fungi have formed symbiotic relationships to trade crucial nutrients, such as phosphate and fatty acids. This relationship is extremely important to the growth and survival of both organisms, and solving the mystery of how they transfer molecules to each other could eventually help reduce the use of fertilizer in agriculture.

Now, researchers at the Boyce Thompson Institute (BTI) have uncovered structural networks of tubules at the plant–fungal interface that could shed light on the mechanisms of this natural partnership. Details of the study were published in Nature Plants.

An estimated 80% of vascular plant families form symbioses with a type of soil fungi called arbuscular mycorrhizal fungi. The fungi penetrate the outermost cells of a plant’s roots and grow intricate branch-like structures called arbuscules. Each host plant cell then grows a membrane that envelops an arbuscule, and nutrient exchange takes place within the space between the plant membrane and the fungal cell wall.

In an attempt to understand the fundamental interaction between plants and the fungi, BTI faculty member Maria Harrison and postdoctoral scientist Sergey Ivanov joined forces with R. Howard Berg, director of the Donald Danforth Center’s Integrated Microscopy Facility. They used advanced electron microscopy techniques to image arbuscules present in the roots of the legume Medicago truncatula colonized by the fungus Rhizophagus irregularis, and were surprised by the results.

“Our understanding of the sub-cellular structural basis of the interaction relies on studies performed 30-40 years ago. Many of them indicated that the material around the fungus but inside the plant membrane would be an amorphous matrix of carbohydrate material,” said Harrison, the paper’s corresponding author. Instead, the researchers found a network of round, tubular and dumbbell-shaped structures constructed of lipid membranes, nearly all of which appeared to connect back to the plant cell’s membrane.

The researchers were further surprised to find another network of membrane tubules in the space between the fungal cell membrane and the fungal cell wall. “It was totally unexpected to see such an extensive proliferation of fungal membrane, particularly knowing that the fungus is starving for lipids,” explains Ivanov, the paper’s lead author.

Harrison and Ivanov speculate that the networks are related to the transfer of lipids.

“Somehow lipids are released from the plant cell and fed to the fungus, and we wondered how they move through what we thought was an aqueous matrix between the plant cell membrane and the fungal cell wall,” says Harrison. “But maybe this space isn’t so aqueous after all, and perhaps this membrane-rich environment facilitates the movement of lipids between the organisms.”

Given the plant and fungal membrane networks’ close physical proximity to each other, the fungal network could be involved in lipid absorption in order to optimize the process. The researchers suspect the network is not involved with transferring phosphate to the plant because the membrane networks are more abundant near the larger branches of the arbuscule, whereas phosphate uptake likely occurs near the smaller branches.

Harrison believes that newer technologies are to thank for finding these networks of tubules. “High-pressure freezing fixation of samples gives better membrane preservation than older techniques. I think that is the reason that these extensive membranes were not seen before,” she says. “Plus, 3D electron tomography is very powerful and let us visualize the networks, which didn’t look connected on 2D images.”

Ivanov, worked closely with Berg, who has expertise with cryofixation and electron microscopy, and Jotham Austin II at the University of Chicago, who is an expert in tomography.

Another research group led by Uta Paszkowski of the University of Cambridge in the UK performed similar imaging studies in rice colonized with R. irregularis, and found similar structures. Those results were published in the same issue of Nature Plants.