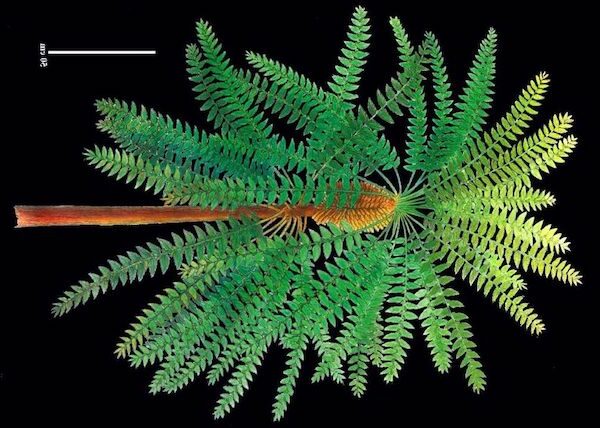 Spectacular fossil plants preserved within a volcanic ash fall in China have shed light on an evolutionary race 300 million years ago, which was eventually won by the seed-bearing plants that dominate so much of the Earth today.

New research into fossils found at the ‘Pompeii of prehistoric plants’, in Wuda, Inner Mongolia, reveals that the plants, called Noeggerathiales, were highly-evolved members of the lineage from which came seed plants.

Noeggerathiales were important peat-forming plants that lived around 325 to 251 million years ago. Understanding their relationships to other plant groups has been limited by poorly preserved examples until now.

The fossils found in China have allowed experts to work out that Noeggerathiales are more closely related to seed plants than to other fern groups.

No longer considered an evolutionary dead-end, they are now recognized as advanced tree-ferns that evolved complex cone-like structures from modified leaves. Despite their sophistication, Noeggerathiales fell victim to the profound environmental and climate changes of 251 million years ago that destroyed swamp ecosystems globally.

The international research team, led by palaeontologists at Nanjing Institute of Geology and Palaeontology and the University of Birmingham, today published its findings in the Proceedings of the National Academy of Sciences (PNAS).

Co-author Dr. Jason Hilton, Reader in Palaeobiology at the University of Birmingham’s Institute of Forest Research, commented: “Noeggerathiales were recognized as early as the 1930s, but scientists have treated them as a ‘taxonomic football’, endlessly kicked around without anyone identifying their place in the Story of Life.

“The spectacular fossil plants found in China are becoming renowned as the plant equivalent of Pompeii. Thanks to this slice of life preserved in volcanic ash, we were able to reconstruct a new species of Noeggerathiales that finally settles the group’s affinity and evolutionary importance.

“The fate of the Noeggerathiales is a stark reminder of what can happen when even very advanced life forms are faced with rapid environmental change.”

The researchers studied complete Noeggerathiales preserved in a bed of volcanic ash 66 cm thick formed 298 million years ago, smothering all the plants growing in a nearby swamp.

The ash stopped the fossils from rotting or being consumed, and preserved many complete individuals in microscopic detail.

Lead-Author Jun Wang, Professor of Palaeobotany at Nanjing Institute of Geology and Palaeontology, commented: “Many specimens were identified in excavations in 2006-2007 when a few leaves were visible on the surface of the ash. It looked they might be connected to each other and a stem below – we revealed the crown on site, but then extracted the specimens complete to take them back to the lab.

“It has taken many years to study these fully and the additional specimens we have found more recently. The complete trees are the most impressive fossil plants I have seen and because of our careful work they are also some of the most important to science.”

The researchers also deduced that that the ancestral lineage from which seed plants evolved diversified alongside the earliest seed plant radiation during the Devonian, Carboniferous and Permian periods, and did not rapidly die out as previously thought.

Read the paper: Proceedings of the National Academy of Sciences (PNAS)