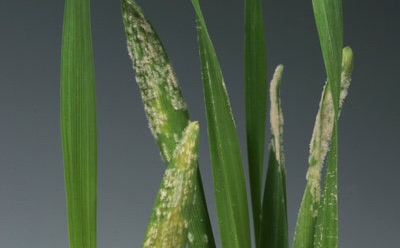 Plants can skip the middlemen to directly recognize disease-causing fungi

Scientists at the Max Planck Institute for Plant Breeding Research in Cologne have revealed that direct physical associations between plant immune proteins and fungal molecules are widespread during attempted infection. The authors’ findings run counter to current thinking and may have important implications for engineering disease resistance in crop species.

Fungal diseases collectively termed powdery mildew afflict a broad range of plant species, including agriculturally relevant cereals such as barley, and result in significant reductions in crop yield. Fungi that cause powdery mildew deliver so-called effector molecules inside plant cells where they manipulate the host’s physiology and immune system. In response, some plants have developed Resistance (R) genes, usually intracellular immune receptors, which recognize the infection by detecting the fungus’ effectors, often leading to plant cell death at the site of attempted infection to limit the spread of the fungus. In the prevailing view, direct recognition of effectors by immune receptors is rather a rare event in plant-pathogen interactions, however, and it has been thought instead that in most cases recognition proceeds via other host proteins that are modified by the pathogen.

In barley populations, one of the powdery mildew receptors, designated mildew locus a (Mla), has undergone pronounced diversification, resulting in large numbers of different MLA protein variants with highly similar (>90%) DNA sequences. This suggests co-evolution with powdery mildew effectors, but the nature of the evolutionary relationship and interactions between immune receptor and effectors remained unclear.

To address these questions, Isabel Saur, Saskia Bauer, and colleagues from the department of Paul Schulze-Lefert first isolated several effectors from powdery mildew fungi collected in the field. Except for two, these proteins were all highly divergent from one another. When the authors expressed the effectors together with matching MLA receptors this led to cell death not only in barley but also in distantly related tobacco cells, already suggesting that no other barley proteins are required for recognition. Using bioluminescence as a marker for direct protein-protein interactions, the scientists indeed found specific associations of effector-MLA pairs in extracts of tobacco leaves. Similarly, a protein-protein interaction assay in yeast also revealed interactions only of matching effector-MLA pairs. These results suggest that highly sequence-related MLA receptor variants directly detect unrelated fungal effectors.

Plant disease is a major cause of loss of yield in crops. Transfer of plant R genes between species is a potentially powerful approach to generate disease-resistant crops. The authors’ discovery that multiple variants of the same resistance gene are able to bind dissimilar pathogen proteins, also in distantly related plant species, underlines the potential of this approach and chimes in with the earlier finding that wheat versions of Mla, Sr33 and Sr50, provide disease resistance to the stem rust isolate Ug99, a major threat to global wheat production.

Paul Schulze-Lefert sees further exciting applications on the horizon: “Our discovery that direct receptor-effector interactions are widespread for MLA receptors suggests that it may be feasible to rationally design synthetic receptors to detect pathogen effectors that escape surveillance by the plant immune system.”