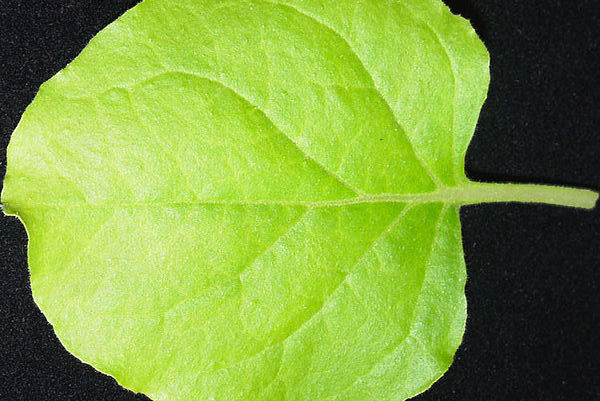 Producing high-value pharmaceutical proteins in plants—sometimes called “molecular pharming”—offers advantages over some other manufacturing methods, notably the low cost and ease of scaling up production to meet demand. But expressing large quantities of “foreign” proteins in plants can also sometimes lead to problems, such as dehydration and premature cell death in the leaves.

Now a team led by Professor Kenji Miura of the University of Tsukuba has discovered that spraying leaves with high concentrations of the antioxidant ascorbic acid (vitamin C) can increase protein production three-fold or even more. They recently published their findings in Plant Physiology.

The team worked with a close relative of tobacco, Nicotiana benthamiana, which is widely used for this type of application as the plants grow well in greenhouses and it is relatively straightforward to introduce foreign genes. The researchers induced the leaves to produce new proteins by a process known as agro-infiltration: the leaves are injected with bacteria called Agrobacterium that carry the DNA encoding the proteins of interest into plant cells. The leaf cells decode the DNA and use it to make the new proteins.

While some foreign proteins cause few problems for the plant cells, others can lead to side-effects that seem to be caused by an excess of damaging reactive oxygen species. Applying ascorbic acid as an antioxidant counteracts the harmful effects and allows substantially higher rates of protein production.

“We tested the method with several different types of proteins,” says Professor Miura. “We used green fluorescent protein (a common tool in the lab) and two human proteins, called Cul1 and an F-box protein. Spraying the leaves with ascorbic acid made a surprisingly big difference, but only when we applied high concentrations of the antioxidant. It seems that ascorbic acid prevents cell death and also reduces the breakdown of the foreign proteins, so the yield is higher.”

The team went on to successfully produce both the heavy chain and light chain of an antibody protein. They showed that the chains produced in leaves assembled correctly into a functional antibody (comprising two heavy and two light chains), and ascorbic acid did not interfere with its immunological properties.

“We are delighted by our results,” says Professor Miura. “As this method of spraying the leaves is so simple, we expect it can be widely adopted and should help to improve the production of many types of valuable proteins for research and medical applications.”