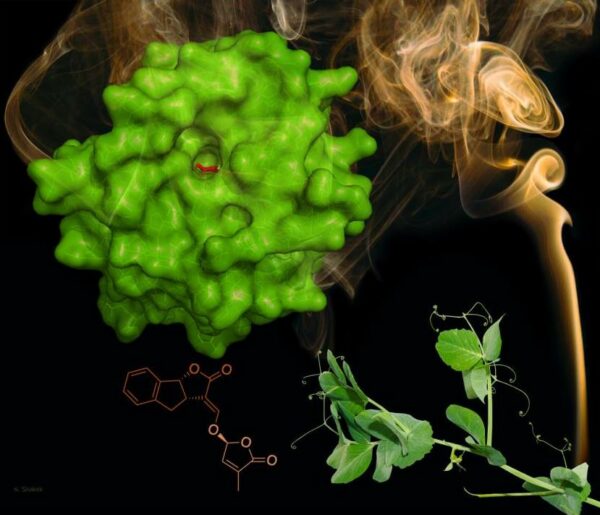 Wildfires are devastating, but they can also bring new life by clearing existing vegetation and allowing new plants to spring up. Many plants in fire-prone areas actually require exposure to fire for seeds to germinate. In the past decade, scientists have discovered an ancient receptor protein that can detect molecules called karrikins in smoke from burnt plant material. The “smoke detector” protein, called KAI2, initiates molecular signals that speed up germination of seeds.

Curiously, KAI2 proteins also show up in a wide variety of plant species that do not live in fire zones. Now a team of researchers led by Professor Nitzan Shabek and Angelica Guercio, a graduate student with Shabek at the UC Davis Department of Plant Biology, has revealed these receptors in pea plants, showing that they also play a role in sensing growth hormones in plants. The work is published in Communications Biology.

The researchers looked at peas because they belong to the legumes, one of the largest families of flowering plants, including several crop species. Legumes have the ability to ‘fix’ nitrogen from the air, through a symbiosis with microbes.

They found that the original KAI2 gene was duplicated early in the evolution of legumes, producing two genes, KAI2A and KAI2B. Using a variety of advanced techniques from genetics, biochemistry and protein crystallography, they found that the two receptors react to distinct  ligands, with KAI2B having a particularly wide range including an emerging class of plant hormones called strigolactones. Using structural biology they were also able to determine at atomic resolutions a new catalytic intermediate of the KAI2 enzyme reacting with strigolactone molecules.

“With our collaborators, we were able to integrate our findings from the atomic structures of the KAI2 receptors and mass spectrometry inspection with experiments in plants to uncover how these receptors diverged in evolution to not only sense hormones, but also how they exactly catalyze them,” Shabek said.

Strigolactones are known to affect a wide variety of processes in plants, including the growth of roots and shoots, and how root networks react to fungi and microbes in soil. Through the new work, the team was able to garner a better understanding of the enigmatic karrikin signaling pathway and the purpose of its receptors in non-fire related plants. This field has far-reaching impacts on agrosystems and food production in legume, and implications for the entire cohort of green plants as well, Shabek said.

The work was partly supported by the National Science Foundation, including a NSF CAREER grant to Shabek. Parts of the work made use of the Advanced Light Source at Berkeley National Laboratory, a U.S. Department of Energy Office of Science User Facility.

Image: A new study shows how plant molecules that originally evolved to detect smoke have been adapted as hormone sensors in pea plants. This has wide implications for crops and green plants in general. Credit by Shabek lab.