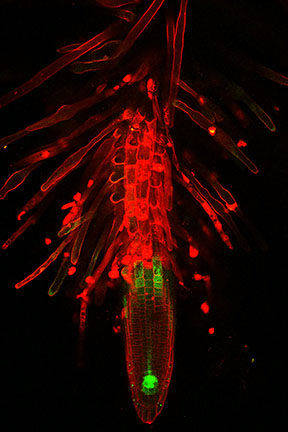 Researchers from NC State University have developed a set of tools that make it faster and easier to modify large segments of DNA.

The new tools are for use in a technique called recombineering. Recombineering is especially important for plant scientists, because many plants have particularly big genomes. And some plant genomes can make a human genome seem puny.

For example, Paris japonica, a flowering plant from Japan, has a genome that is 50 times the size of a human’s. These huge genomes, and their correspondingly large individual genes, can make it challenging to introduce precise genetic changes to a plant. For example, making genetic modifications to help make a plant resistant to a new pest, or to study the fundamentals of how plants grow.

The researchers share how to use the new tools (and how they made them) in a paper published in the journal The Plant Cell. They have also made the toolset available through the Arabidopsis Biological Resource Center.

“Before, unless you were in a specialized lab that worked with big pieces of DNA and had a lot of experience in molecular biology, it was unlikely you would adopt recombineering,” said Jose Alonso, a William Neal Reynolds professor of plant and microbial biology and senior author on the paper. “Our hope is that by making it more accessible, any molecular biology lab should be able to get into recombineering with these new tools. They should be a good resource.”

The toolset will improve the precision and reliability of fundamental plant science, he added. This basic science forms the foundation for innovations in pest resistance, yield increases and growing season extensions.

“With this toolset, we’re putting in an extra copy of the gene of interest — we’re not modifying the gene in the chromosome — but the gene is surrounded by the same large flanking DNA sequences that regulate it in the chromosome,” said Anna Stepanova, an associate professor of plant and microbial biology and an author on the paper. “This allows us to capture the normal environment of the gene and therefore when and where the gene is turned on and off.”

Including this contextual information allows plant scientists to gather more accurate information, whether they are interested in genes involved in plant growth or fighting off pests, she said.

The toolset can be used to introduce genetic modifications in almost any plant species, including crops like corn, rice and tomatoes, but it is easier to use in well-studied plants such as Arabidopsis, Alonso said. Arabidopsis is a small plant related to cabbage and mustard that serves as a “lab rat” for many plant scientists.

Genetic tools included in the toolset include those to add glowing tags to a protein of interest in order to track where it is made within growing plants, a tool to easily trim off excess or problematic DNA sequences and a tool to make it easier to transfer the newly modified gene of interest into a plant.

The toolset and the team’s protocols are scalable. They can be used to modify a single gene or used in high-throughput studies to investigate a whole genome, 96 genes at a time, Stepanova said. However, she expects most researchers will use the toolset to study 10 to 20 related proteins.

Researchers can also use the toolset to insert multiple modified genes into a single plant, even an entire series of genes to produce valuable compounds, such as certain medications, Stepanova said.

The toolset was built gradually over the past eight years as the tools were needed for other projects in the Alonso–Stepanova lab. Research scholars Javier Brumos and Chengsong Zhao were chiefly involved in creating the toolset, though three undergraduate students also assisted in the project.

“The students get familiarized with some of the molecular techniques and methodologies in recombineering, which is useful in whatever career they go into,” Alonso said. He added that one of the students, Yan Gong, is in graduate school at Stanford University; another, David Soriano, is interviewing at medical schools; and the third, Arjun Patel, is a junior at NC State.

To test out the toolset, the research team added a yellow fluorescent tag to 96 genes involved in producing plant hormones. Then they transferred the tagged gene to bacteria that then inserted the tagged gene into the cells of Arabidopsis flowers. Some of the seedlings that grew from the seeds produced by these flowers received the modified gene and glowed yellow (under certain conditions). The researchers looked at when and where these glowing yellow proteins were produced in order to understand when and where plants make or respond to the growth hormone auxin.