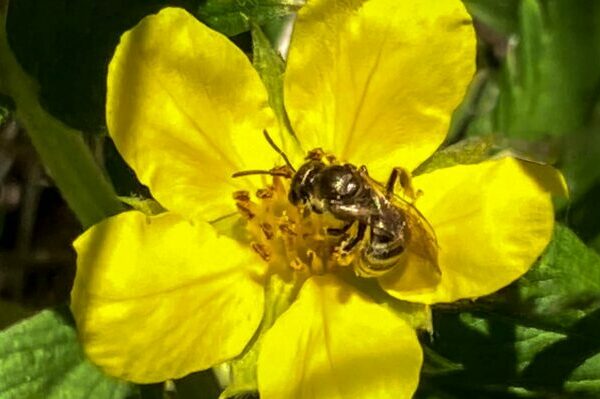 You can’t see it, but different substances in the petals of flowers create a “bulls-eye” for pollinating insects, according to a Clemson University scientist whose research sheds light on chemical changes in flowers which helps them respond to environmental changes, including climate change, that might threaten their survival.

Matthew H. Koski, an assistant professor of biological sciences in the Clemson College of Science, led a research team that studied the bright, yellow flowers of Argentina anserina — a member of the rose family commonly known as silverweed — to learn how pigments in the petals that are visible only in the ultraviolet spectrum play an integral part in the plant’s plasticity; that is, its ability to quickly respond to a changing environment. The team also included Clemson researchers Lindsay M. Finnell, Elizabeth Leonard and Nishanth Tharayil.

The journal Evolution featured the findings on the cover of its March edition.

The researchers studied silverweed growing at different elevations in southwestern Colorado to better understand the roles of the various UV-absorbing chemicals in the plants’ petals and how these chemicals work to aid in pollination and, thus, reproduction.

Koski explained that although humans cannot see the UV patterns on the flower’s petals, many of its pollinators can.

“I’ve always been fascinated with how [color variation of flowers] arises and how it evolves and what factors drive the evolution of color variation,” Koski said, “so I got interested in thinking about how we perceive color versus how the organisms that interact more frequently with flowers perceive color.”

“Insects — pollinators, for example—see in the ultraviolet spectrum,” he continued. “So, flowers that reflect or absorb ultraviolet wavelengths give (to pollinators) the perception of different colors that we can’t see. I’ve been fascinated with uncovering what these UV signals might be doing functionally with respect to pollination. When I thought about the trait of interest in ultraviolet absorption, it is biochemistry. It’s a biochemical trait that leads to different perceptions of UV absorption and reflectance.”

Koski said a wide range of plants have concentrations of UV-absorbing chemicals at the base of the flower’s petals, while the tips of the petals have more UV-reflecting chemicals. He said this creates an overall “bulls-eye” effect that guides insects in their search for pollen.

The team wanted to uncover more about how the plants adapt to thrive in different environments — in this case, a difference in altitude of 1,000 meters. They found that flowers at different altitudes adapt to their environments by producing differing amounts of UV-blocking or UV-absorbing chemicals.

“At higher elevations, there are always more UV-absorbing compounds or larger spatial area of UV absorption on the petals, compared to the low-elevation populations,” Koski said.

The researchers said this demonstrates the plant’s plasticity, which Koski defined as how differing traits arise in the same organisms under different environmental conditions. This is a critical step in understanding how organisms adapt to survive change.

“What’s important about plasticity is, when we think about climate change and global change, plasticity is one mechanism by which natural populations can respond really rapidly to changing climates and persist under those climates,” he said. “The process of evolution, where you’re getting changes in the genetic code over time, is thought to proceed more slowly than just responding plastically to environmental change.”

Koski said that one question raised by the research is whether plastic responses to environmental situations are adaptive. Do they offer any advantage to an organism, or are they changes in how a trait develops because of the environment without impacting plant fitness?

“One thing this study found is that the plastic change in UV pigmentation benefited the plant, especially the ones at high elevations because increases in ultraviolet absorption on the petals resulted in increased pollen viability,” he explained.

Koski went on to say the research will help scientists better understand how organisms respond to environmental changes and even predict if or how well some organisms would be able to survive rapid environmental change, such as from global climate change. The research could also be important for agriculture, he said, because some of the same UV-sensitive pigments at work in silverweed are also present in commercial crops such as mustard and sunflowers.

“It’s interesting to think about if abiotic factors like UV or temperature are shifting the expression of these traits, how is that going to impact how pollinators view the flowers, and how’s that going to affect things like yield and seed production in crops, for example,” Koski said.

The team’s research could even be important for home gardeners trying to attract specific types of pollinators to their plants.

“I think one thing people think about is planting a diversity of flowers with different colors and morphologies to attract many different types of pollinators, like a pollinator-friendly garden,” Koski said. “One thing to think about is that we often don’t know all the details of what colors are perceived by pollinators, and how that could be changing with the seasons. Just because things may look very similar to us, they may actually be very diverse to pollinators and could attract a different suite of pollinators than we expect.”

Image: Clemson University Assistant Professor of Biological Sciences Matthew Koski led a team of researchers who studied the flowers of Argentina answering—a member of the rose family commonly known as silverweed—to learn how pigments in the petals that are visible only in the ultraviolet spectrum play an integral part in the plant’s plasticity. Credit: Matthew Koski