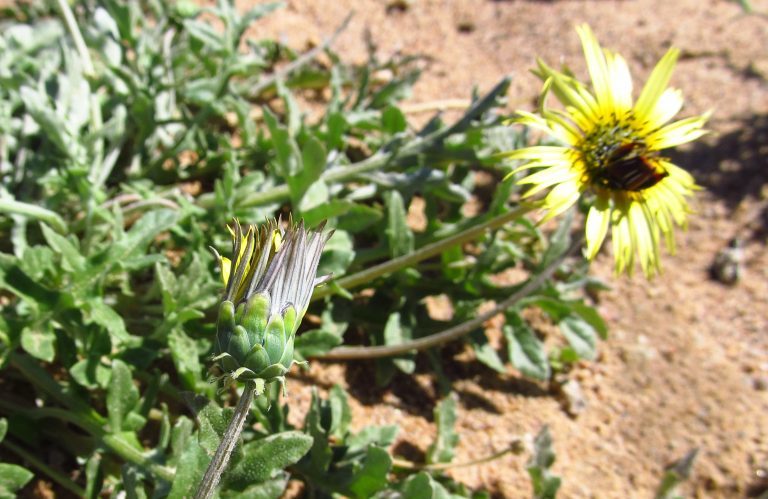 Species of daisy that close their flowers at night, produce colour in their exposed lower petals that makes them harder to spot for herbivores, reducing herbivory rates of flowers. The findings are presented in the British Ecological Society journal Functional Ecology.

Researchers from Stellenbosch University, South Africa found that tortoises, one of the main herbivores of the daisies, were unable to distinguish the lower petal surfaces against a green leaf background. Tortoises prefer to eat protein-rich flowers over leaves, but when confronted with closed flowers, they showed no preference between them.

When the researchers modelled the colours of the lower petal surfaces in the vision of other herbivores, they also found these colours to be indistinguishable from leaves.

In contrast, species of daisy that do not close at night produced the same colouration on their lower petals as the upper petals exposed to pollinators.

Plants face an evolutionary conflict between having flowers that attract pollinators while avoiding herbivores. Often plants defend themselves chemically, but this can have adverse effects on pollination.

The researchers examined the colouration of 77 Asteraceae species, modelling how they appear in the visual systems of chameleons, horses and goats as proxies for tortoises and larger herbivores in the area, like springbok. They then tested the preferences of real tortoises with both open and closed flowers against leaf backgrounds.

On further research Dr. Kemp said “Unfortunately, we could only do this using one plant family in one botanical region, it would be great to see if other plant species also use colour to avoid herbivores.”

The researchers would also have liked to use larger herbivores such as springboks in their behavioural experiments, but Dr. Kemp adds that “this was practically not possible.”