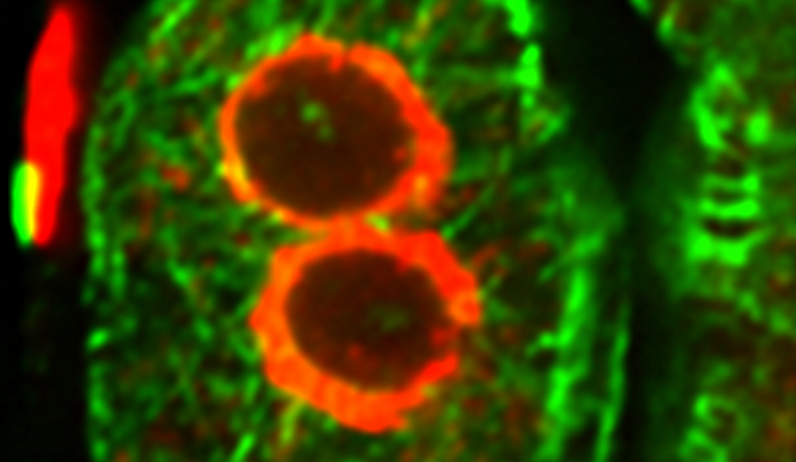 Cell division in Plants: How cell walls are assembled

Plant researchers at Martin Luther University Halle-Wittenberg (MLU)_ are providing new insights into basic cell division in plants. The scientists have succeeded in understanding how processes are coordinated that are pivotal in properly separating daughter cells during cell division. In the renowned scientific publication “The EMBO Journal “, they describe the tasks of certain membrane building blocks and how plants are impacted when these building blocks are disrupted.

For their study, the plant researchers examined the roots of the thale cress plant, Arabidopsis thaliana. They cultivated normal plants and plants in which they artificially switched off certain enzymes that affect the composition of the membranes. “We wanted to find out which membrane building blocks are important for cell division and why,” explains Professor Ingo Heilmann from MLU.

For plants to develop, their cells have to divide. First, the genetic material located in the cell nucleus divides. Two whole new cell nuclei are formed from the duplicated genetic material. The other components of the cell, for example the chloroplasts and mitochondria, are distributed between the two future daughter cells. All this takes place in the parent cell.

Only then the daughter cells will be separated by a new cell wall. The whole process can be compared to a construction site. First, a temporary scaffold made of protein fibres, the so-called phragmoplast, forms in the middle of the cell. Like railway tracks, these fibres guide the building materials needed for the cell wall. Small bubbles gradually transport new cell wall material along the rails. This is assembled together by a complex fusion machinery to form a larger structure: the cell plate. The cell plate continues to grow at its edges from the centre of the cell outwards until a cell wall disc completely separates the daughter cells from one another. “The fusion machinery has to correctly coordinate the protein fibres for everything to function properly, otherwise the freight cars will transport the cell wall material to the wrong spot or at the wrong time and cell plate formation will cease,” explains Heilmann.

Using biochemical and cell biology experiments, his research group was able to show that PI4P, a membrane building block, plays two roles during cell division: PI4P not only controls the activity of the fusion machinery, it also ensures the new material is transported in the right direction. For the first time, the researchers were able to show that PI4P helps to ensure that the protein scaffold of the phragmoplast is assembled and disassembled in the right places. In normal plants, this results in regular cells that fit together perfectly and give the plant its needed stability.

In mutated plants, however, the scientists observed severe defects in cell division: They found enlarged cells containing several cell nuclei as a result of the unsuccessful separation of the daughter cells. Some cells were unable to divide completely, the cell tissue was chaotic, and there were enormous differences in the sizes of the individual cells. “This is not happy tissue. It makes the entire plant more unstable, reduces its size and impacts how it adapts to environmental stimuli,” explains Heilmann.

The results of the research group from Halle help to better understand the dynamics of the plant’s cytoskeleton of microtubules. The cytoskeleton not only determines the direction of cellular transport processes during cell division, but also directs general plant growth. Therefore, the new findings could have far-reaching consequences, for example on the deposition of cellulose in plant cell walls and thus on biomass and cellulose production. However, it must first be determined whether the findings can also be applied to other plants and how the activity of the enzymes investigated here can be specifically regulated.