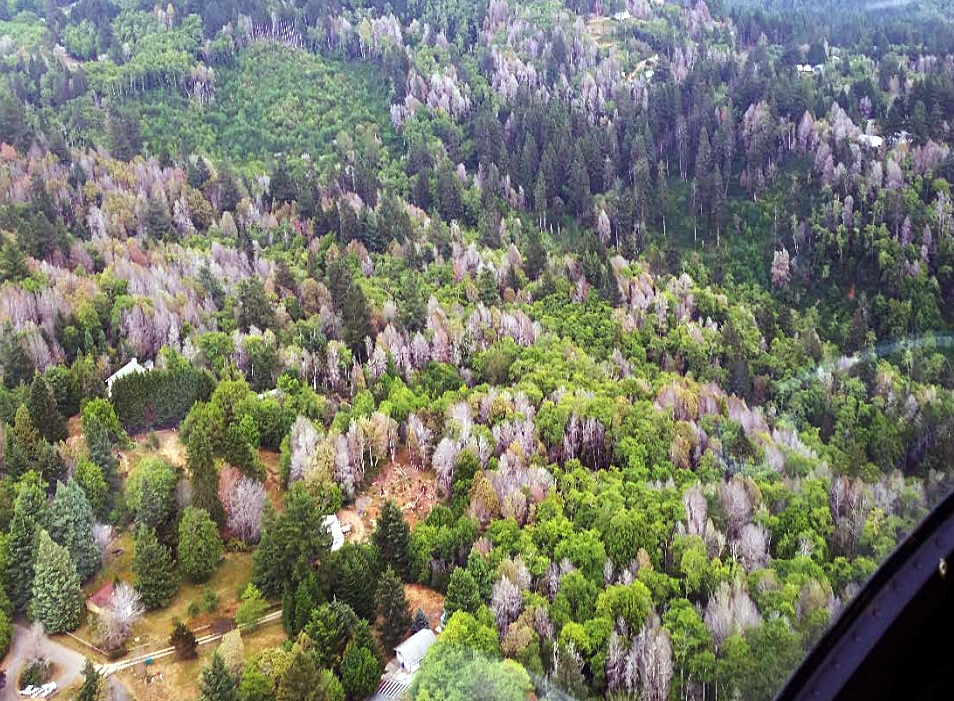 When a new, more aggressive strain of the pathogen that causes sudden oak death turned up in Oregon, scientists and stakeholders banded together to try to protect susceptible trees and the region’s valuable timber industry.

Sudden oak death is a serious threat. Since 1994, the disease has killed millions of trees in California and Oregon. If the disease spreads from an isolated outbreak in Curry County, Oregon, to neighboring Coos County, the impact could be severe: a 15% reduction in timber harvest, loss of 1,200 jobs and about $58 million in lost wages, according to an Oregon Department of Forestry report.

Researchers with North Carolina State University’s Center for Geospatial Analytics reached out to help in Oregon, offering Tangible Landscape, an interactive model that allows people of all skill levels to control complex simulation models with their hands and collaboratively explore scenarios of management decisions.

While predictive models can provide useful forecasts about where the pathogen may go, they can be tough to work with, requiring coding or technical software experience, says Devon Gaydos, lead author of an article in Philosophical Transactions of the Royal Society B: Biological Sciences and an NC State doctoral student.

“The Tangible Landscape system makes it a lot easier because people can interact with the model by touch instead of through the code or the computer,” Gaydos says. “People can add objects to a 3D model of the landscape to represent different types of management, and then with the click of a button we see how that action may affect the disease’s spread within a few moments.”

The model also allows participants to factor in budgets for disease management to try out different approaches to stop its spread, both on a large and small scale, Gaydos says.

“You can think of our disease spread model like a weather forecast: Knowing what the weather may look like this afternoon can help you decide if you want to bring an umbrella to work,” she explains. “Similarly, knowing how the pathogen may spread over the next year can help people gather resources, figure out which areas to target for surveillance or management, and request funding.”

Researchers took a participatory modeling approach because the disease could affect many stakeholders in Oregon – private landowners, timber producers, U.S. Forest Service managers, tribal groups that consider tanoak trees sacred, and thousands of local residents, including those employed in the timber industry. They began by working with a dozen local and regional experts, in the spirit of learning from each other.

“The idea of co-creating models with stakeholders is that by involving the people who are most affected, you’re going to get better data as a scientist because they have a lot of information about local dynamics and on-the-ground management that you may not know,” Gaydos says.

“It’s all about working together as partners to frame questions and problems, improve models and decide how to use those results for sustainable solutions,” adds co-author Ross Meentemeyer, NC State Forestry and Environmental Resources professor and director of the Center for Geospatial Analytics.

In this case, the team found out that some of the data used in the model needed to be more accurate at a fine scale – a problem participants could help with. In addition, the model needed to show the impact of decisions at more frequent intervals to capture the complexity of field operations.

The team also learned that collective action is paramount. Meentemeyer notes that “just a few uncooperative landowners ‘opting out’ of management could allow the pathogen to escape quarantine and the put the region at huge economic risk.”

After making adjustments, researchers plan to use an updated version of Tangible Landscape with a larger group of stakeholders in Oregon, as well as pursuing new research.

“More and more stakeholders are becoming interested in using the model, and the Oregon Department of Forestry wants to use it in an economic analysis of the situation and to test different management scenarios for the future,” Gaydos says.

“We are excited to collaborate with more teams and apply our modeling approach to forecast and control emerging infectious diseases of other plant, animal and human populations,” Meentemeyer says.

Read the paper: Philosophical Transactions of the Royal Society B: Biological Sciences