I may not be totally unbiased here because of my past involvement in the various national and international Arabidopsis projects, but there is no denying that plant science would not be where it is today if it were not for Arabidopsis. Arabidopsis is the plant that has united the world of basic plant scientists and profoundly changed the way research is conducted in plant sciences. How did this come about? Several prominent scientists described the history of Arabidopsis research from the perspective of researchers (1, 2, and 3). My answer comes from a perspective of a research administrator responsible for the management of the Arabidopsis research programs at the National Science Foundation (NSF) from 1990 through 2007.

Philip H. Abelson spoke of “a genomics revolution” in his Science editorial published in 1998 (4). He predicted that “…the greatest ultimate global impact of genomics will result from manipulation of the DNA of plants. Ultimately, the world will obtain most of its food, fuel, fiber, chemical feedstocks, and some of its pharmaceuticals from genetically altered vegetation and trees.” His concluding sentence read, “Today, humans employ the capabilities of only a few plants. A major challenge is to explore the opportunities inherent in some of the hundreds of thousands of them.”

As the editorial was being written, a plant genomics revolution was well underway through the internationally coordinated effort to sequence the whole genome of Arabidopsis by the Arabidopsis Genome Initiative (AGI), a consortium of 6 laboratories from U.S., E.U., France, and Japan. The AGI’s work resulted in a paper published in Nature in December of 2000 (5), a first complete genome analysis for a plant and the second for a higher eukaryote. This project differed from traditional research projects in that the goal of the project was not to answer a specific scientific question, but rather to deliver a high quality whole genome sequence of Arabidopsis – a research resource/tool – for the use of the entire community. It was a highly sophisticated service project. AGI members were required to share credit equally not in proportion to individual members’ contributions. Although it took four years for the AGI to complete sequencing of the entire Arabidopsis genome, the sequence data were immediately made available to the public as they were produced. This was a total departure from the previous practice in which the data were not expected to be shared until they were thoroughly analyzed and the result published by the researcher who produced them. In a sense, the AGI researchers were pioneers in opening up a new type of scientific project. I witnessed disagreements and consternations that occurred throughout the project, but in the end the voice of reason always prevailed. I think the Arabidopsis community matured greatly through the whole genome sequencing project. This type of service project has since become an integral part of research portfolio in plant sciences. As a result, individual researchers regardless of their locations can access and mine the data for their own purposes, greatly leveling the playing field and accelerating the advancement of plant sciences as a whole.

Remarkable as the AGI’s success was, it did not just happen. In the background was the culture characterized by the spirit of cooperation through open communication and sharing of ideas and information. The culture was initially fostered by the small number of laboratories working on Arabidopsis and was quickly embraced by the Arabidopsis community. The Arabidopsis community established the Multinational Coordinated Arabidopsis Thaliana Genome Research Project, hereafter referred to as “the Project,” in 1990. The whole genome sequencing project was part of the Project’s long-range plan (6). We should also remember that the AGI received strong support and encouragement from a broad community of plant scientists. Prior to the start of the sequencing project in 1996, NSF heard from a number of individual plant scientists urging NSF to support an Arabidopsis whole genome sequencing project even though it could have meant less money available for their individual research grants. Furthermore, NSF received strong support from several agricultural commodity groups for using part of the plant genome research program’s fund, which was appropriated to support basic research in economically important plants, for the purpose of accelerating the Arabidopsis genome sequencing project. Not to take away the credit from the AGI researchers that they so richly deserve, I believe that the completion of Arabidopsis whole genome sequencing and subsequent scientific and technological advances in plant sciences were made possible by the global community of scientists who shared the same goal – to understand what makes a plant a plant from the molecular to the ecosystem levels. 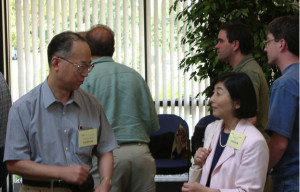 The 25th International Conference on Arabidopsis Research (ICAR) will take place July 28 – August 1, 2014, in Vancouver, Canada. ICAR was a component of the original Project’s plan as a means to promote exchange of ideas and sharing of information. A majority of the 25th ICAR participants have likely entered the field after the Project started, and at least half of them do not know the time when there were no freely available research resources and tools. To me, that is the most precious outcome of the Project, namely new generations of plant scientists to whom international collaboration and sharing of ideas and research resources are an ingrained part of their research culture.

Today, the challenge Abelson spoke of in his editorial is being addressed by the world’s plant scientists through the Global Plant Council. Certainly, plant science research is still woefully underfunded in relation to the enormous contributions it can make to solving the world food and energy problems. However, I am very optimistic about the future because I have total confidence in the extraordinary ability of the plant science research community to put the higher goals ahead of individual needs and wants, and to complement their individual strengths through international collaboration and coordination.