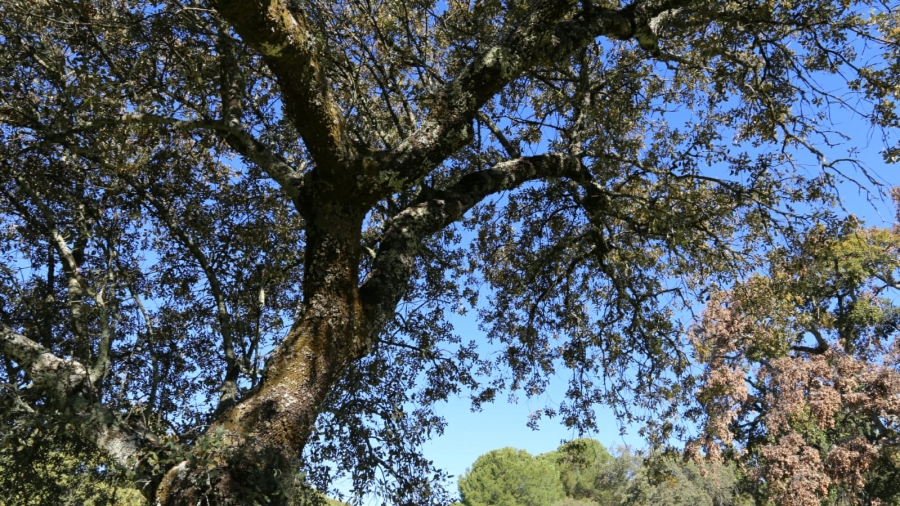 Dehesa health starts from the ground up

Holm oak decline, which threatens dehesa sustainability, has got governments, farmers, civilians and the research community to join forces in protecting this ecosystem. Though the pseudofungus oomycete Phytophthora cinnamomisería is thought to be the main cause of holm oak decline, climate conditions have been shown to influence as well. Even so, this puzzle has yet to be solved.

In search of the last few pieces to help understand how the disease develops, University of Cordoba Forest Engineering researchers Francisco Ruiz and Rafael Mª Navarro, in collaboration with researcher Alejandro Pérez de Luque from IFAPA(Agricultural and Fishing Training Research Institute of Andalusia, Alameda del Obispo center), and international researchers, carried out a study on microorganism biodiversity in soil by means of using molecular techniques, in order to analyze if and how interactions among soil microorganisms influence the seriousness of the disease.

The study focused on fungi and oomycetes that live in soil, and the interactions that occur among them. In addition, it confirms that changes in microbiota structure and biodiversity are fundamental for woodland health in two ways: on the one hand, interactions among soil microorganisms directly influence pathogens that affect holm oak and on the other, the presence of some beneficial microorganisms helps to improve the trees’ health.

A well-known biocontrol agent, Trichoderma, appeared to be related to the absence or scarcity of oomycete pathogens. What is more, an abundance of mycorrhizae resulted in less defoliation of the woodland. These microorganisms are able to establish antagonistic relationships with the pathogens, increase a tree’s ability to absorb and stimulate an autoimmune response. In other words, a structure conducive to the fungi community and the presence of key beneficial species provide the oak with more resources to defend itself from the pathogen and improve the health of a woodland, even when root rot is present.

Turning the focus underground also unravels other mysteries. All of the lands that were studied had root rot (decline), and nevertheless, the pathogens that are considered to be the main causes of the disease were not relevant on many plots of land, despite them being teeming with dying holm oaks. The key to this mystery was the presence of a mixture of less aggressive individual species such as Alternaria and Fusarium among others. When these kinds of species synergize, they can cause the same symptomatology as do more aggressive species, even to the point that they cause the tree to die. So, UCO and IFAPA researchers concluded that a diagnosis of oak decline should not only be limited to the presence of one single pathogen, but rather a complete analysis of the present communities and the relationships among them is required in order to detect danger in a more precise way.

Advances in technology is what has allowed for solving the complexity of this study. The research group applied plant biotechnology methods to the study of forest pathology, which along with being able to access data from the Environmental Damage Tracking Network, part of the Andalusian Regional Government, allowed for understanding the role of soil microorganisms in the decline of Andalusian dehesas. The diversity and structure of microbiota is a key piece to this puzzle. Considering the soil microbiome within the comprehensive management of holm oak and cork oak root rot on the dehesa is bringing the research community closer to finding the solution that will most effectively protect this ecosystem.